A.M.H was circumcised at the tender age of 9. She remembers the nitty-gritty details of this ordeal even though it has occurred over 40 years ago.
Her father, a highly-educated man was in a conference outside Sudan , he has repeatedly warned her mother and his mother, her grand-mother, of taking her to the cutter.
" My daughters will not be circumcised, this is backwards and oppressive, " stated her father, a US- educated Sudanese professional.
The women gathered, conspired and produced a detailed plan of taking her to the cutter while her father, her only savior, was away. The plan was successful and A.M.H was pampered that day and promised a lot of sweets and toys. She was excited, she didn't know what was in store for her.
Two women held her down with all their force and proceeded to cut a part of her body.
She remembers the blood gushing out of her , the overwhelming soreness, the inability to get up.
She wanted to get up and play, but she couldn't move an inch. She felt disabled and helpless.

When her father came back a few days later, he figured out that something was wrong. He asked her and she told him the truth. She shared her pain with him.

It was the 1960's and female circumcision was a widespread practice , hence, when her father announced his decision to divorce her mother for disobeying him, he was brushed off as insane.

The divorce never materialized, but female circumcision was the main cause of conflict between the young couple for the rest of their lives. It has changed their marriage as much as it changed the life of this 9 year old girl.

A.M.H is now a mother. When she married the father of her daughters in the early 80's, they jointly made a decision to not let their daughters undergo this painful procedure. Despite protests from close family members, they've rejected their pleads and ignored their heartfelt advices.

Where did it come from?

Female circumcision is the excision of any part of the female genitalia. A age-old tradition passed down from the Pharaohs , it's a popular practice in Egypt, Sudan, Somalia and Ethiopia. It's also practiced in certain communities in Iraq, Yemen, Burkina Faso and Kenya.

Until very recently, the Sudanese were known for practicing the most severe type of circumcision, pharaonic circumcision or infibulation, in which all of the external genitalia is removed. However, in recent years, the least severe type, clitoridectomy, also known as sunni circumcision, has been on the rise. Pharanoic circumcision causes serious health problems and complications during pregnancy and childbirth since the sutures are cut and after the baby is delivered, the woman is sewn up again or refibulated.

According to traditional beliefs, the purpose of FC is to reduce a woman's sexual desire to make sure that she remains a virgin until her marriage. It also aims at increasing the amount of sexual pleasure for the male partner.
However, some wholeheartedly believe that circumcision has roots in Islam.

Just a few days ago , M.S., a young Sudanese mother in her early 30's organized a circumcision ceremony for her 6 year old daughter in a country where FC is a crime punishable by imprisonment.

"I've conducted intensive research and based on this research, I believe that this practice is first and foremost an Islamic practice," stated M.S.

Despite attempts from family and friends to intervene, M.S. used a book by an unknown Egyptian sheikh as her sole reference.

Although FC predates Islam, some scholars believe that Islam had to tolerate the practice as it was already ingrained in the society. In a hadith, the Prophet (PBUH) stated that FC shouldn't be excessive and harmful to the woman in question.

In modern times, the Grand Mufti of Egypt, Prof Dr. Ali Goma'a announced during a meeting with ten scholars from all over the world that Muslims shouldn't practice this custom seeing that it is a crime against humanity.

In an attempt to understand the relevance of FC to today's urban youth living in Khartoum and its twin cities, I was able to conduct an anonymous survey in which the participants were asked whether they are aware of the practice and whether they are familiar with circumcised girls and their opinion about the practice. Female participants were asked if they had undergone FC.

A.M, a 27 year old Sudanese man believes that we should distinguish between ordinary or sunna circumcision and pharaonic circumcision.
" Ordinary circumcision is common in most Islamic and gulf countries and it protects the female from herpes and infections in the long term," explains A.M.

A.A, a 24 year old Sudanese male agrees with A.M and adds that it's important not only from a medical point of view, but it also ensures hygiene.

M.G , a 25 year old Sudanese male student living in the United States believes that circumcision is a crime.

On the other hand, a young Sudanese woman working in the field of journalism stated that FC is "a traumatizing experience which can be likened to the horror of rape."

She added that FC is based on cultural beliefs regarding a woman's honor.

Other young Sudanese women interviewed used words such as damaging and painful to describe the practice.

From the results of my survey, I realized that Sudanese men are more aware of the different types of circumcision as opposed to Sudanese women who view FC as one barbaric practice and fail to see any variations.

What A Man Wants

In an article written by Meghan Sapp for Women-e-news, she recalls the story of a young Sudanese man, a son of a diplomat who has recently returned to Khartoum. He fell in love with a young lady and was getting ready to marry her.

He was hesitant about asking his young bride about FC so he asked her sister if she had undergone FC. The sister miscommunicated this question and the young woman panicked and before their wedding, she had the procedure performed.

The marriage didn't last, FC was one of the main reasons to blame.

Dr. Babikar Bedri, a prominent researcher in the field of female circumcision at Ahfad University believes that there are no studies tackling how young couples discuss this issue before marriage.

According to Dr. Bedri, contrary to the old days when grooms returned their uncircumcised wives, a study carried out at Khartoum University among male students found out that 75% would like to have an un-excised future wife.

As our perceptions about a woman's right to choice and female sexuality are changing at an alarming rate due to living in the digital age and the government's intervention , I can't help but wonder whether the desires of men to have an "un-circumsised" wife will play a significant role in decreasing the practice in the near future.
Posted by Reem at 9:02 AM 4 comments:

The Fatal Beauty of Tajooj 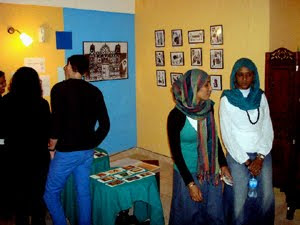 My artwork offers a glimpse into my world. I hope that it inspires your imagination and leaves you with a lasting impression. - Suzanne Hilal

Last Thursday, in a small cafe in Khartoum, the capital of Sudan, guests sipped lemon juice and lattes and listened to a number of young men perform modern love songs as Suzanne Hilal transported a sizable audience hundreds of years back to an isolated place in East Sudan through her collection of print works. Hilal, a Sudanese-English artist whose work spans a range of mediums including printmaking, pastels, and ink, is known for the way her works are inspired by Sudanese folktales and reflects the country's culture and history.

The name of the exhibition, The Fatal Beauty of Tajooj, is taken from a well-known and tragic love story. According to Sudanese grandmothers, Tajooj was the most beautiful girl in Sudan during their time. She was also the love interest of her cousin, who was known for attacking neighboring tribes. One version of Tajooj's story tells us that the cousin in question, Mohlaq, was forced to divorce Tajooj because she was expected to marry another man. Another telling of the legend says Mohlaq's uncle refused the marriage proposal to his daughter because Mohlaq publicly declared his love for Tajooj in a song, which was against the traditions of his tribe.

Wandering the desert for the rest of his life, Mohlaq was brokenhearted and lost. The beautiful Tajooj was attacked and killed by a group of bandits. A sword was plunged deep into her chest, we are told.

Hilal was first introduced to folktales as an undergraduate student working on a paper comparing Sudanese and Arab stories. During her research, she read five books of these stories from different regions and tribes, and stumbled upon the story of Tajooj in Ali Lutfi Abdallah's The Clever Sheikh of the Butana and Other Stories.

"Her beauty is taken from Tajooj" declares a popular Sudanese song. "You will see the beauty of Tajooj in her people," declares another song about Kassala, the closest city to the town Tajooj was from.

One day, between her artwork and studying law in Chicago, Hilal plans to write and illustrate her own love story. Based on her own multicultural heritage, the story will be set in Sudan, but will end like an English love : happily.
Posted by Reem at 5:08 AM 1 comment: