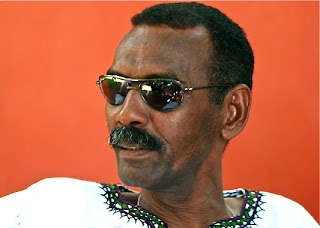 KHARTOUM - There’s been no word of Abdelmoniem Rahma, a poet and political activist, since he was arrested a month ago.

Rahma was close to the ousted governor of Blue Nile State, Malik Agar, and involved in the arts. According to a statement published by Human Rights Watch, he has reportedly been tortured in detention and is at risk of further torture and other ill treatment.

In an apartment on Tuti, a crescent-shaped island at the confluence of the Blue and White Nile surrounded by greater Khartoum, Rahma’s wife and three children wait by the phone, hoping for news of his whereabouts.

Abdelmoniem Rahma was arrested by Sudan’s National Intelligence and Security Service (NISS) on 2 September in Damazin, the capital of Blue Nile State, one day after the resumption of fighting between the Sudanese national army and forces loyal to the northern sector of the Sudan People’s Liberation Movement (SPLM-N).

“I found out about his arrest from the newspapers,” said Rahma’s wife, who does not wish to be named. “I didn’t even know he was in jail.”

A few weeks ago, security personnel broke into a neighbour’s apartment, having mistaken it for Rahma’s residence. They were about to vandalise the place when the neighbour returned home from a mosque and spoke with the officials.

“He was very understanding and told me not to worry if they came back to search my house,” said Rahma’s wife.


Her other neighbours are more wary of any association with Rahma and his family. His wife and children have had no company since that incident, because rumours have circulated that anyone visiting them would be immediately arrested.

“My sister is very disturbed,” said Rahma’s brother-in-law. “She is too scared to leave the house, even to go to the grocery store.”

Rahma formerly headed Sudana, an organisation that promoted the work of marginalised art and literature groups in Sudan. He was a member of the Sudanese Writers’ Union during the 1980s and headed the Arabic section of the Sudan Radio Service network in Nairobi between 2003 and 2005.

Rahma also co-founded the daily Ajras al-Hurriya (“Bells of Freedom”), and served as its administrative director.

Hussein Saad, who worked as an editor at the newspaper, has known Rahma since 2008.

“He was very dedicated,” he said. “We worked very hard for months until the first issue was published.”
Read also: "Uncertain future for Sudanese media" by Osman Shinger
Ajras al-Hurriya was shut down by authorities one day before South Sudan’s independence.

The last time the two met was during Ramadan in Blue Nile State, when Saad went to cover a news conference organised by former governor Malik Agar, along with other politicians. Rahma was working as an advisor to Agar on cultural affairs.

“Rahma invited everyone to break the fast at his house,” Saad recalls. “He helped us during the trip more than anyone else.”

Saad, who spoke with Rahma by phone a few days before his arrest, said he believes his colleague’s political activities, especially his affiliation with the SPLM-N, made him a target when tensions rose between that party and the Sudanese government in Blue Nile State.

“He was connected to Blue Nile and he has a personal relationship with the overthrown governor, Malik Agar,” Saad added.

After years of exile, mostly in Kenya and Ethiopia, where he met his wife, Rahma returned to Sudan after the Comprehensive Peace Agreement was signed in 2005.

He was also instrumental in the development of a traveling theatre to promote peaceful dialogue among Sudan’s diverse cultures.

In a formal statement published on 7 September, the executive committee of the Sudanese Writers’ Union called for the immediate release of Rahma or a fair civil trial if there is a case against him.

Hurriyat, an online Sudanese human rights publication, reports that a former detainee imprisoned with Rahma stated that the writer was subjected to constant beatings and forbidden from using the toilet.

“Arbitrary arrests in Sudan are common because this is not a respectful country,” said Ali Haj, former political editor of Ajras al-Hurriya and friend of Rahma. “Officials don't have any charges against you and they don't tell you your rights. People are sometimes arrested in violent ways and subjected to torture.”

For more information: Amnesty International Rahma’s wife, who is of Ethiopian origin, expressed concern about her children’s safety in this time of uncertainty about her husband’s condition.

“I'm scared they could get kidnapped or taken away from me,” she said during a conversation at her apartment, adding that she sought help from the UN refugee agency, the UNHCR. “I was interviewed, but they didn't offer any assistance,” she added.
Posted by Reem at 1:51 AM No comments: