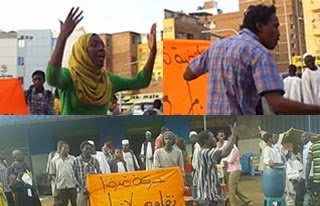 They were not exactly sure what to name it or what their mechanisms would be until….one of them came up with the name Girifna. They wanted something short and catchy, a name that will be easily recalled by people. The orange color was picked at random,  they saw it as the most powerful color as they wanted to chose colored papers in the stationery shop.

Girifna was born in their houses as they sipped tea and argued over the content of the flyer on the way to the printing house, in fact, the first flyer was produced the night the movement was born.

As they discussed what they wanted to do, they did not expect that the movement will grow to encompass volunteers all over Sudan's states and in the diaspora, they didn't know the challenges they will face.

Sudan's first elections in 24 years was the general elections in 2010. Sudan was at the crossroads as the international channels reported. It was a long overdue elections before the end of the CPA. All of the parties and leading opposition figures were back to the country or back to the spotlight from living and working underground.

The elections was surely going to be flawed , the NCP signed the CPA but will never give up power to any other political party. However, this was not the only problem was the elections, the people running for elections were another problem. Their faces were too familiar and were or have been involved in the Sudanese political game from the 1950s or at least the 1980s. For youth, the elections were almost a joke, many of Sudan's population were youth and have not seen an elections taking place in Sudan before, but looking at the people running to represent Sudan, the faces were not even close to youthful.

By October, elections were coming up and the opposition was between campaigning for their "old but gold" nominees and boycotting the elections because the NCP was dishonest and will rig the elections and did not give them the agreed-upon space to lobby and campaign.

Just days later, Al-Sharq Al-Awsat reported on the movement and from then on, it became one of the main voices of opposition in the runner-up to the elections. The donations came in day by day, from ordinary citizens who liked the new creative idea of the movements and political activists who saw in Girifna what their parties lacked, heavy street -based work and activism. At one point, the movement distributed 120,000 flyers a day and the flyers made their way on buses to Medani and Port Sudan and through unknown ways to the IDP camps in Darfur and the  Sudanese refugees' camps in Chad.

What distinguished Girifna from other political movements in Sudan is many aspects of its existence..

Firstly, its founders and first members to join the movement were born in the 80s and 90s and came of age during the NCP's rule, they saw a Sudan in the worst shape it had ever been in, they received the المشروع الحضاري Ingaz civilizational project's educational curriculum with their brainwash, they were young when the official "opposition" gallivanted in neighboring countries and abroad building one opposition coalition after the other and failing to deliver Sudan from its decades-long political deadlock.

Secondly, they saw the big gap between the traditional political parties and their constituencies. Girifna marketed on this by representing itself as a street movement. The movement recruited dozens of volunteers to distribute flyers in markets, bus-stops, universities and all locations that are heavily populated. Not long after it began, a 17-year old volunteer and an older activist pushed for the movement to organize a public talk. Soon, the movement was organizing informal public talks known as "mokatabat" in markets and bus stations. The talks had a loud echo in Khartoum, creating a buzz around the movement on the neighborhood-level and also online when the videos were posted.

Thirdly, the movement which mostly rallied youth around it, gave the power back to youth, a sector that represents the majority of the nation's population but is usually marginalized inside political institutions and other institutions.

Girifna grew too fast before its first birthday, it spread all around Sudan, established a website and a social media presence and became known to the public and to the international community.

With fame..comes problems. The movement began suffering from one blow after another, as the main active anti-NCP body during the elections , its members were arrested and intimidated. At one point, with each batch of flyers, a volunteer would get arrested.

The security crackdowns took their brunt on the movement because the NISS is well-resourced and equipped with an entire office to deal with the so-called "youth movements". However, the main reason remained the structure of the movement that continued to fail it time and time again.

The movement did a lot of work and changed the face of activism in Sudan, it did what no political institution was able to do in Sudan over the years. It made youth interested in the national cause, interested in Sudan and its future.

It made activism "cool".

From its onset, Girifna produced a satirical soap video that will continue to inspire the movement for years. It also distributed plastic orange wristbands that were cool and created a brand for the movement, at one point, the movement create orange events where youth would gather on Nile street wearing orange, a color that was branded as the color of resistance.

Girifna had a big role in the social media activism sub-culture that was born in the period post Jan-30 2011, with the invitations to the trials of activists to the political detainees campaigns and recording videos with families of  detainees and with detainees upon their release.

On another note, the movement was unable to sustain itself. Its decentralized structure and its work as a street-based movement made it impossible to secure itself or its members amidst the various security crackdowns. At the end, the movement was based on being out there, on the streets with the public, and this made its members too visible and subjected to detentions.

Since the beginning, the movement had no leadership which made all the members feel equally in charge and equally involved in the work processes. The movement grew through its work, but its foundation remained weak, almost nonexistent.
The movement saw in decentralization a system that will keep the work divided amongst its various cells and will secure the members, but the system had flaws. It made a large number of members face the risk of detention without taking into consideration their readiness to do so. Many of the movement's members were with no prior political experience , Girifna was their first experience, meaning they lacked the political training packages provided by more formal political movements on security and dealing with the NISS.

Moreover, the movement couldn't escape the same traditional political parties they rebelled against. From the onset, Girfina was heavily targeted by the government through the NISS as they saw it as a security threat and a body that could spark large-scale protests against it, but more so by the opposition, that sought to dominate the movement through several ways. Firstly, the opposition movement saw in Girifna both a threat and an opportunity, a threat because it was attracting their youth members who were fed up with the bureaucracy of the traditional parties and an opportunity because it was an active body with a real street presence.
Moreover each party thought of embracing Girifna through supporting it logistically and encouraging their youth members to continue being present in the body.

Finally, with all this ongoing pressure and the members exhausting a lot of energy to prevent Girifna from being controlled by a political institution and to make it continue being independent, the weak structure of the movement began to unravel.

The movement like all contemporary social and political movements in Sudan began to fall victim to the many diseases of the traditional political institutions. Most prominently, the accusations that some people around the movement are NISS agents or are agents of other bodies and the exclusion of some members in an attempt to keep the movement more secure. This particular disease affected the "family-type" movement and continued to weaken it.

With all its challenges, Girifna is and will remain one of the most powerful political movements in the contemporary history of Sudan and one day, its history with all its flaws and victories should be written.