Pain for Beauty: the Dilemma of Facial Cutting in Sudan 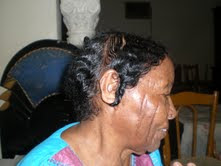 This post is part of the series ‘Culture and Human Rights: Challenging Cultural Excuses for Gender-Based Violence’ hosted by Gender Across Borders and Violence Is Not Our Culture.

In a spacious house in Fetihab, a neighborhood in the city of Omdurman in Khartoum state, Soad Al -Tijani, a widow in her 70s recounts her traumatizing experience to her grandchildren and me, a journalist and the daughter of her niece.

She is telling us the story of her facial cuts. Every few minutes she stops her tale to underscore how lucky we are to be born in the contemporary world where practices such as facial cuts have vanished. She was not so lucky. Her round face bares three deep cuts on each cheek.

Facial cuts are common in some Sudanese tribes. In the North, many women were subjected to this practice until it began dying out in the 1950s.

The cuts are different from tribe to tribe. The most common kind is the one-eleven (111) cuts on both cheeks.

Women glorified facial cutting and they believed that it enhanced beauty and that is why the prettier and chubbier women were cut before others.

At the tender age of 9, Soad was taken by her aunt to undergo facial cuts or “sholouk” as they are called in Sudan.

“I was made to lie down while a very large woman was sitting cross-legged on the floor and holding my head on her lap, two were holding my arms so I wouldn’t move and one was sitting on a stool ontop of my chest,” recalls Soad.

She couldn’t turn her face or move any part of her body. She was still as the woman on the stool cut both cheeks with a razor.

“The razor was very large and looked like a nail clipper, they literally dig the skin out of each cut, ” said Soad.

Her grandchildren and I were disgusted by the ordeal and continued bombarding her with questions. The youngest in the room, Mustafa, is still in high school and did not utter a single word. When I asked him what he thought, he said that he agreed with me that women were subjected to a lot of pain.

According to Soad, her mother was too scarred to take a strong stance against her powerful aunt. When her young daughter was brought home with a swollen face and neck, the mother couldn’t look at her for weeks.

“They dipped cotton in a black liquid and placed it on my face to stop the bleeding and my mother took me to my aunt’s house for weeks to reapply fresh cotton,” said Soad who said that her father was also against it.

Family and societal pressure is strong in Sudan. In the past it was worse with extended families living in one house. A child was seen as belonging to the whole family. Even though Soad’s father was against facial cutting, he told her to ask for thinner and less deep cuts as a compromise. But when the women came to cut her face, she couldn’t negotiate with them and ended up with the most severe and deep kind of cuts.

Her eldest brother, a journalist and writer was completely against the practice. He didn’t talk to their parents for three days as punishment.

Facial scarring is very rare in contemporary Sudan. Most women who were subjected to it are either deceased or are at least in their 60s and few young women abide by it. Perceptions about beauty have dramatically changed over the last decades, modern Sudanese women would never imagine being facially cut.

“I never thought about doing it to my daughters,” said Soad.

Soad is proof that culture can and does change.
Posted by Reem at 11:40 AM No comments: