Memory from September 2013- the Brown Scarf

Last week, I found the flimsy brown scarf lying on my couch between my other scarfs and a black skirt. It was washed and ironed and folded, almost too neatly for such a rebellious scarf. I didn't even know that it had left my wardrobe where I kept it since Friday the 27th of September 2013.
Let me tell you the story of this small scarf, which is more like a neck tie than a scarf. It was a very hot Friday, my best friend, Sara, came over in the morning after hearing news that a large protest will take place in Omdurman that day, it was a long week, mass protests took place all over Sudan and were suppressed by live bullets. By Friday, over 200 were killed.
We agreed to go to the protest and live-tweet what was happening. I wore leggings and on top of it, a black dress belonging to my mother and orange shoes since I couldn't find my sneakers….. and most importantly, a beautiful teal cotton scarf. It had an exceptional color and although Sara told me not to wear it. I insisted on wearing it because its material will make me cool down. Before we left the house, I sprayed some vinegar mixed with water on the edge of my beautiful scarf, in anticipation of heavy teargas.

We left the house in a big group, my parents and my aunt, my two cousins who never protested before, my uncle and ..Sara. We walked to Al-Gala2 neighborhood before we saw masses walking towards us, they were chanting while holding big signs with anti-government slogans.
We stood there in shock before we found ourselves in the middle of the protest. Estimates by various groups and my father who I consider a good statistician said that the protest had up to 10,000 people.
We marched for a long time until we reached the Central Police Station next to Omdurman Locality.
There was a moment of silence before the crowds shouted "peaceful", dozens of police officers and plain-clothed security officers stood there in shock, at the massive numbers and the loud voice.

My best friend told me that when the crowds chanted "peaceful", one plain-clothed security officer signaled "NO" with his finger.
We should have seen it coming.
When we reached the middle of Street 40, I put more vinegar with water on tissue-paper and then put it inside my scarf before wrapping the scarf around my mouth. I wanted to breathe in as much vinegar as possible. I could see the tear-gas coming.
At some point, the crowds stopped and sat on the floor and began chanting the national anthem while I felt like I was going to faint from the heat and exhaustion, Sara and I crossed the street and knocked on one of the houses and asked for water.
I took a few sips from the water then turned around to make it back to the crowds when I saw them getting dispersed. They were trapped and army vehicles were coming from both sides, firing live bullets into the air. The crowds were running, both from the live bullets and from the tear-gas bombs that were being fired left and right.
I remember seeing people running at me , dozens were trying to force themselves into the house were I had asked for water. I crouched on the floor and put my hands on my head. I saw hands reaching out to me, my best friend and another friend were in tears, screaming at me to come inside the house.
I made myself into the house with dozens of young men and women. A young man was leaning on the wall, with his face stretched in pain, his arm was dislocated or broken or something…during the chaotic dispersal scene.
Another young man was asking for a cloth, a scarf…something to tie the poor guy's hand. I took off my beautiful teal scarf and wrapped his arm with it and then tied the scarf to his neck.
A young woman who lives in the house where we were staying gave me the brown scarf. 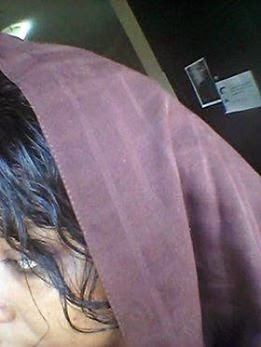 For a long time, I thought about my scarf, my friend told me it is now hung on the young man's wall. As a beautiful souvenir from the September protests.
I also thought about the brown scarf. One day, I got dressed and threw it inside my beige bag and walked to Street 40. As I came closer to the house, I decided not to take it back. I decided to keep it.
Posted by Reem at 12:37 AM No comments: