A good friend of mine said that Northerners are upset about the South Sudan referendum because they are jealous that the Southerners have the chance to vote and every Southern vote makes a difference, we have nothing.
Yes, I have to admit..I'm very jealous. I registered to vote in April's elections, but my candidate of choice withdrew from the race and I was left wondering whether my voice would have made a difference in the first place.

I now put myself in the shoes of a Southern woman my age, she heads to the polling station to vote and her vote, her voice, could be the last vote needed to reach the 60% threshold. 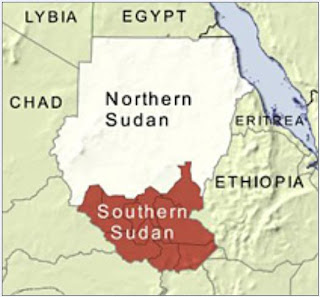 In 2005, when the CPA was signed, I did not expect this day to come. At the time, the idea of secession seemed absurd. We were always going to be one country. John Garang was alive and he was going to run for presidency and I was going to vote for him. Even my grandmother said she would vote for him. He repeated slogans such as "united we stand, divided we fall" and mesmerized us when he described the new Sudan.

The New Sudan was a reality and change was going to happen in my lifetime.

John Garang died in a plane crash and unity died with him. It was buried with him. We believed in the New Sudan and forgot that the old Sudan is cursed.
"We are a cursed nation," my mother tells me. Days before Nimeri was expected to sign a peace agreement, he was toppled and the war dragged on. A month after Garang became the vice-president, he died.

Khartoum, the safest capital in Africa (as we claim) was suddenly a battle-zone. Cars were burned, people were killed, age-old ethnic divisions were unleashed and we were reminded that it takes a very long time for survivors of war to let go of their grudges...
The ugly face of the Northern/Southern division was exposed, hopes for unity were shattered.

Today is Saturday the 8th of Januruary 2011, tomorrow is the day I've never expected to see. Southerners will head to the polls and vote on whether they would like to secede from the North or remain united with the North.

The outcome seems like a fact, secession is inevitable.

"They will seperate for a year or two, then they will come back and join the north. They can't have their own country, they need us," said an acquaintance, matter-of-factly......Denial is not just a river in Egypt....

The official argument is that the North has failed to make unity attractive in the past 6 years. People deliberately overlook the fact that the country has been seperating for over 50 years. Ever since Africa's longest-running civil war began, the idea of seperation or "independence" was popular in the south.