Is it possible to respect one of the "Pope's" statements? 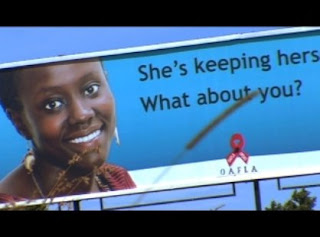 The Pope is in "Africa" and he is making headlines. It's good that he is here given that at least 1/5th of Africans are Catholics, however, his opposition to condoms is completely unfounded.
In some AIDS-ravaged African countries, abstinence is not the only solution to combating AIDs. It worked in Uganda, but the shoe doesn't fit all situations here. It's not working in other countries.
Even if using condoms is against Catholicism, if it's a matter of life and death, God is forgiving.
He chose the wrong continent to make such a statement, doesn't he know how religious many Africans are? They are going to respect his words.
Posted by Reem at 7:26 AM

I'm Catholic, though I have to admit I oppose Catholic teaching on birth control.

It's actually based on obsolete thought. At one time, before the ova were discovered, it was believed sperm contained little homuncili, tiny people in miniature. Therefore, contraception was murder.

Since we now know that NOT to be true, it's actually not conversant with ethics.

I completely agree that these comments make do sense is this context: abstinence does not always work as a policy. It reminds me of how USAID refuses to spend any of its budget on condoms, preferring to fund abstinence programs (at least this is the case in Zambia).

Interesting to hear Crushed' comments on the origins of the Catholic view on contraception - certainly outdated. This stance is dangerous and completely irresponsible.

Crushed, you should write about this! The Pope needs to update his views! I thought he did after he started a youtube channel!:)

African,
I know even though American orgz can't really propose the idea of abstinence in the US where AIDS is increasingly becoming a problem!

I wouldn't call it dangerous since it did work in very specific conditions, but it is irresponsible because the shoe doesn't always fit. Also, most Africans are religious they are so going to listen to him!