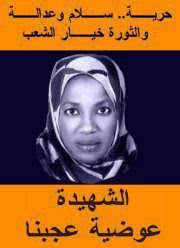 Last week, the death of Awadia Ajabna, a young woman living in Al-Daim  shook Khartoum and the entire country as her relatives and angry youth took to the streets and protested. In a country where human life is cheap and 1.5 million died in the civil war and hundreds of thousands died in Darfur and otherplaces, it was interesting to see how one woman managed to capture the attention of a capital where the majority are apathetic to the suffering in the Sudan outside Central Sudan.

Why did Awadia Ajabna become a national cause even more than the Manasir protest that went on for over 100 days?

Its surely not because she is a celebrity. Awadia worked in a kindergarten and came from a family that hails from the embattled Nuba Mountains, a periphery within a periphery. Two years ago, she ran in the national elections to represent Al Daim, the neighborhood she lives in, as part of the Sudanese National Labour Party. She was loved by her family and respected by her neighbors, but the way she died became the main source of anger and frustration.

According to her sister, the Public Order Police were patrolling the neighborhood. This police force is notorious and is known for using vague laws to extort money from men and women , they are despised in Sudan. Their main aim is to fight social corruption and they can arrest women for "indecent" clothing and men suspected of consuming alcohol.

Naturally, the meaning of indecent clothing is unclear and it is based on the opinion of the arresting officer. As they patrolled next to the Ajabna house, they stopped her brother and accused him of  being drunk. He was allegedly speaking on the phone and they most probably wanted to bully him into taking his phone as a compromise. The brother in question argued with them when things  heated up, the police forces retreated , but came back larger in number and armed. It remains unclear whether they raided the house, but what we are sure of is that Awadia was shot in the middle of a chaotic situation where a number of officers opened fire on her family and neighbors who are unarmed civilians.

She was killed by the public order police forces. When someone is shot in the head, you can not but say that this was a deliberate act.

Today, Amal Abbas, the veteran journalist and editor, writes in Al-Sahafa that " it is not strange that a civilian dies in front of her house in light of a regime that for two decades has enabled the culture of war and incriminated the other especially women in the practices of the public order police,"

It is also not strange that the public order police is armed. For years, it has degraded women in Sudan by restricting their dress and appearances in the public life and subjected them to public lashings. In 2010, right before the international day for human rights, a video appeared of a woman being lashed, violently.

Toni Morisson, who won the Nobel Prize in Literature, wrote in Newsweek Magazine, that she has seen "many instances of human brutality, but this one was particularly harrowing."
Morisson went on to describe how proud the woman in this video made her feel. She wrote "after each cut of the lash into your flesh, you tried to stand; you raised your body up like a counter-whip. It so moved me to see your reactions; I interpreted them as glimmers of hope, of principled defiance."

Only two years ago, the public order police killed another woman. Nadia Saboon, a simple tea lady was trying to make ends meet in a market in Khartoum. The public order police attacked the tea sellers and poor traders in the area in what is described as a "sweep". She ran for her life, but fell onto a metal stake and bled to death. Saboon died , but her story was not as publicized as Awadia's ordeal.

The difference is, this is the first documented time the public order police kills a woman in the safety of her house, in her comfort zone.

Awadia's death inspired many protests. For days, youth protested on Sahafa street and inside Al-Daim. They held banners saying that "Awadia is a matryr. They said they want retribution.

Protestors burned the public order police station in Al-Daim. They say that Ethiopians and tea ladies living there are particularly happy as the police officers working there used to blackmail them and subject them to humiliating abuses.
The area was turned into a military zone. Police cars and trucks full of armored police officers caught my attention on my way to the funeral.

The tear-gas was very intense inside alleys. People in Al-Daim say that an old grandmother died as a result of the intense tear-gas. A young girl studying at Sudan University called Omnia is currently being hospitalized as the tear gas bomb hit her on the head during the protest.

I'm particularly fond of Amal Abbas's daily column a few weeks ago, she ended it by saying that " let the events of Al-Daim be a trigger towards total change."
Posted by Reem at 12:44 PM

an excellent piece! It might be a good idea to enable share links on your posts so that they can easily shared on facebook, tweeted etc..

I remeber some tweets about this situation when it first occurred,this post has filled in the blanks, cheers