No to Oppressing Women- unpublished article 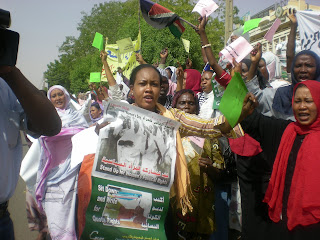 
****This article was written last December. It was never officially published


Samira Mahdi, a member of Inclusive Security, one of the founders of the initiative for Sudanese Women in Politics and a member of UNDP's initiative for female politicians arrived at the Ministry of Justice at 9:30 a.m. on Tuesday the 14th of December with two other activists to submit a memorandum calling for the abolition of the public order laws in protest of a leaked video showing a girl being brutally lashed while onlookers laughed and did nothing. The three activists were entrusted to hand in this document before the protest starts at 11 p.m.

Upon arrival, they were shocked to find the protest police at the site carrying their shields and fully equipped because the organizers were given permission from the police to hold a silent protest and the streets they would use during the march were also agreed upon beforehand.

“ They didn’t let us inside the building so we sat down and waited for other protesters. We sat on the floor wearing our white headbands and carrying banners that read “no for women’s oppression” and we were silent,” said Mahdi.

After the protest started growing, 6 trucks full of police officers dressed as civilians, the trademark of the public order police, arrived at the scene and demanded from the protesters to get up.

“When we refused and remained silent, they forced us to get up. They were literally carrying us off the floor, some women were seniors citizens like me and some were young, but it was very aggressive and some women fought back to no avail,” recalled Mahdi.

Mahdi took a strong stance and refused to get into the car. The police officer told her to go home, but she did not. She walked to the Northern police station where she figured they would be taken and made quick calls to lawyers and political leaders from all parties.

“ The first thing they did was take their phones away from them, but two smart women hid their phones in their bras and this was how we were able to contact them,” said Mahdi

She added that 100 lawyers came to the station to defend the women and bail them out. They were imprisoned from 11 p.m. to 4:30 p.m.

“ We could hear the women signing patriotic songs reminiscent of the independence and the 1964 revolution that led to democracy,” said Mahdi

No case was filed against the protesters until now even though the police forces vied to prosecute them.

Some activists had to seek medical help after the arrests.

Magdi El Gizouli, a Sudanese journalist, blogger and analyst who wrote about the video girl in his daily column in the citizen newspaper believes that the video is a representation of the presence of patriarchy in Sudan.

“The crowd watching including the judge were quite amused one must admit. I do not think the question here is restricted to how the state and its disciplinary institutions behave towards women, but how society at large perceives and deals with the female body,” he told me in an email.

Since coming to power following a bloodless coup in 1989, a government calling itself the national salvation government embarked on “the civilization project” an attempt to reshape the Sudanese nation by introducing a number of new social laws. The public order laws were born in 1991 and they put Sudanese individuals, especially women, at risk of getting arrested, jailed and lashed through a number of ambiguous laws.

The woman getting lashed in the video was persecuted under article 152 of the criminal act laws of 1991 which states that police officers responsible for fighting social corruption have the right to arrest, fine and lash a woman if she is dressed indecently.

“ It is up to the man arresting you to decide what is decent and what is not. It all depends on his personal judgment. We don’t know what to wear anymore, “ said Sally Ahmed*, whose sister was lashed over ten years ago when the public order police barged into their university and arrested many girls at random.

Ahmed added that the officers would actually park their cars in front of their university to harass girls as they leave the campus. The university in question is known for its liberal education and for its activism for gender equality.

After years of being subjected to abuse, Sudanese women were finally inspired by the well-known case of Lubna Hussein, a Sudanese journalist persecuted under article 152 in 2008.

No to women’s oppression, a coalition to campaign against the public order laws was formed to protest the case of Lubna and the coalition continued campaigning against the law and was the main organizer of last Tuesday’s protest.

According to a source in the national police, the video was released to tarnish the reputation of Sudan.

Merely a week after the government claimed to have started investigating the video and the punishment carried out on the girl, President Bashir endorsed the punishment in an official speech and told the Sudanese public to pray and revise their understanding of religion.

The lashed girl in the video and the case of Lubna Hussein sparked national and international outcry, however, the Strategic Initiative for Women in the Horn of Africa (SIHA) puts the number of women lashed in the last year and a half at about 42,000.

Al Gizouli believes that the idea of lashing to public order officers is beyond the execution of a judicial punishment.

“ The audience and the actors, with the exception of the woman, were having fun. This was parody and not punishment. One could sense the obscene joy of male figures observing the disciplining of a female body. You could name it the pornography of punishment,” he told me.
Posted by Reem at 11:31 AM